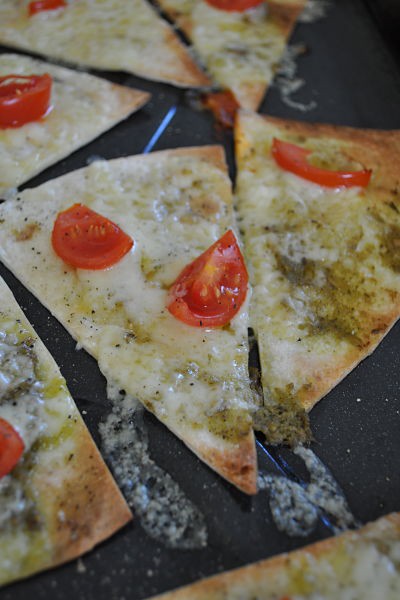 Pizzinis
Necessity is the mother of invention and don’t I know it.  Improvisation has been saving the day for me lately.   I love cooking but not always.  I love cooking when it is leisurely, when it is un-rushed and when it is for me.  I do not love cooking under pressure and with almost 6 teenagers on my hands (the boys are 12 for a couple of more months) trying to keep them fed can be a bit of a timebomb.  I am the timebomb and the fuse sizzles when they bang into the kitchen swing out of the fridge and emerging with a mouthful of whatever they garble ‘what’s for dinner mom?’

Yesterday I’d 7 ‘starving’ kids trailing in the door after 3 blissful hours at the beach.   I warned them in the car that:
A) there was to be no mad scramble for the showers, they were to decide the order of showering before we reached home and showers were to be limited to 5 minutes
B) they were to stay out of the kitchen – if they were actually ‘starving’ they could beg outside the door for a slice of bread to tide them over but they were not going to ruin their appetites
C) they were to hang up their towels after their showers

Somehow and unexpectedly they organised themselves for the showers and that went off pretty well.  There’s usually door banging and some screeching but it was orderly enough.
A few waifs dared to knock on the kitchen door for a crust of bread and to each one who did I told them they had delayed dinner.
Dinner was a creamy chicken, pesto, tomato and onion sauce over pasta, now that is generally filling but after three hours at the beach I knew their hunger would be at a dangerous level and this would have to be supplemented.  The inventor in me flung on some chopped baby potatoes to roast in olive oil and salt before sprinkling on parmesan and they did the trick, perfectly shoring up any gaps left between the chicken and the pasta sauce, they left the table groaning.

However NOBODY hung up their towel…….

Pizzinis
These came about a few weeks ago at home when one of the grouches true to form demanded ‘what’s for dinner?’ in that unpleasant semi-barked lieutenant-esque tone that teens have perfected.  A reply of ‘loaded burgers’ was met with ‘what, no chips?’ and some eye-rolling, which I countered with a ‘get out of MY kitchen until dinner’s ready.’
After banging a few cupboard doors myself I spied the ever adaptable and long-life packet of soft tortilla that are so often my saviour.
Cut into wedges, smeared with oil, partly crisped then topped and returned to melt in the oven these served as gratefully devoured gap-fillers to accompany the burgers.

Pizzinis:
You will need:
2 large soft tortillas (wraps)
some oil
some pesto
some cheese
cherry tomatoes
Method:
Pre-heat the oven to high
Cut the soft tortillas into triangles and arrange on baking trays.
Brush over a little olive oil and heat in a hot oven for 5 minutes
Remove trays from oven, spoon some pesto on the tortillas.  Grate over some cheese.  Top with halved cherry tomatoes and return to oven until cheese has melted and outside edge of tortillas are browning up.
Enjoy!
‘Til next time, Sheila