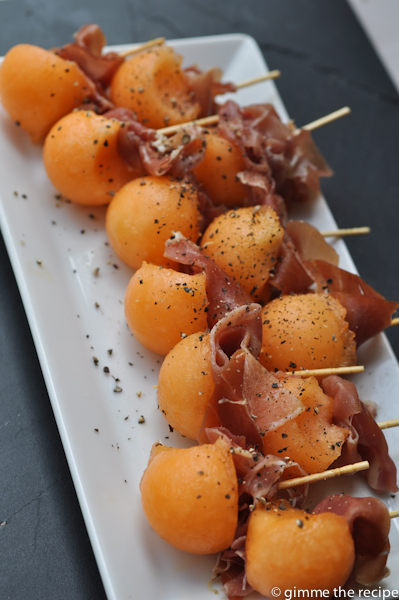 First up, these pastry bites are made with a roll of ready-made puff-pastry. You will find these in the chill cabinet in the supermarket or in the frozen food aisle (if frozen will need to defrost in the fridge overnight). Follow the instructions on the pack for the pastry. The one I used required to leave the chilled pastry out for 10 minutes before use and it comes on its own baking paper which is very handy to line the trays. Space the pastry squares out on the baking trays, make sure your oven is pre-heated. Use an egg wash of beaten egg and milk to brush around the border of each pastry square.

I made Brie & Cranberry Pastry Bites for a Christmas Party, other good combinations are red onion relish topped with goats cheese or sundried tomato / pesto topped with mozzarella

Next up are some delicious Parma, Cream, Cheese & Pickle bites – these are from a Mary Berry recipe that I saw on a show about Christmas Party entertaining a few years ago. A very simple Christmas Party Food recipe.

So simple that a recipe is hardly required, just chop some basil, parma, sundried tomato and mozzarella or buy the small mozzarella balls (called bocconcini) and assemble on a cocktail stick before dipping into some basil pesto. Delicious and simple for your next Christmas Party Food.

Finally, these melon & Parma bites are really simple and tasty. I like to season them with cracked black pepper just before serving. A melon baller would be a really handy gadget when it comes to putting these together and I really like to use Galia melon as the strong peachy colour is so pretty and the taste works really well with the Parma.

Keep an eye on my instagram where I will be sharing more festive food ideas for the Christmas Holiday season. 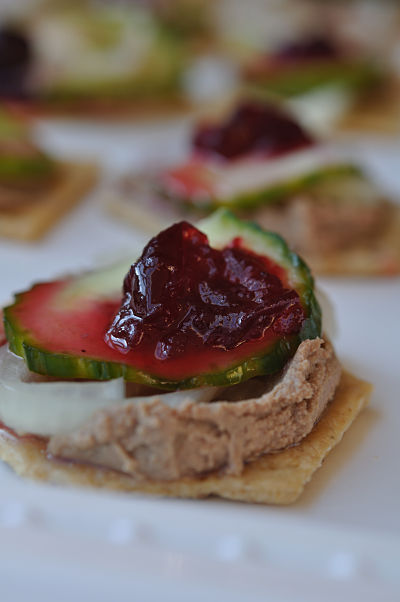 What do you want from Christmas nibbles?  You want something easy, tasty and quick to prepare that is going to take the edge off the hunger of the gathering hordes. Even if you simply want to invite people over for some Christmas drinks you’d better be prepared for the fact that at least one of them will arrive absolutely staaaarving and will hoover up a plateful of nibbles as if vying for a Guinness book of records placing.  Have a few platters of nibbles set up and be prepared to refill the plates with these easy to put together bites.

You will need some good quality crackers, some great locally produced pate and then some tasty topping alternatives.  I suggest either Beetroot Relish (above) or Pickled Cucumber with pate and cranberry (below).

Don’t be put off by what you are about to see here because you are not expected to grow your own beetroot for this recipe as you can pick them up at the supermarket and I am merely showing off.  I was aghast to see that I could buy a bunch of three beetroots for a euro and wondered at the effort it had taken to grown mine and in terms of labour (weeding) was it worth it?  It is of course satisfying to grow and eat your own vegetables and I will be doing it again purely for the satisfaction and pleasure of eating what I’ve grown.  My beetroots were small but adequate enough and taste sensational.

As well as buying the beetroots you can also skip the preparation step and buy your beetroot relish pre-prepared though do try to source locally if you can.  This recipe is from one of my ‘go to’ food magazines which bills itself as  ‘Ireland’s food and drink bible’ – Food & Wine Magazine.  A subscription to this would please anyone with an interest in food.  So to give proper credit to the provenance of the recipe it is from Maire Jones of GIY Rush/Skerries who in turn passed it on to Michael Kelly who writes for the magazine. (not exactly rewritten – as I cut corners when I can and prep. as I go)
Beetroot relish:
You will need:
1.3kg cooked beetroot
540g onions
720ml red wine vinegar
450g cooking apples
1 tsp salt
900g granulated sugar (yes, that is a lot isn’t it!)
Method:
Peel and finely chop the onions.
Peel, core and roughly chop the apples
Peel and cut beetroot into cubes.
Splash a little of the vinegar into a large pan with the onions and soften them over a medium heat for a few minutes.
Add the apples and 4 tbsp of the sugar and cook until apple is easily squashed with a spoon.
Add the cubed beetroot, salt and half of the vinegar.  Simmer until thick.
Stir in the sugar and remaining vinegar and continue until thick.
Pot in sterilised jars.
Use within six to eight weeks.

Pickled Cucumber:
Again this can be easily bought and I love the one from the Just Food range available in my local SuperValu.  If you fancy a go at making your own it is incredibly easy and very satisfying.  I did so last year and you can click here for that recipe.

Christmas Nibbles:
With your beetroot relish or pickled cucumber either made yourself or shop bought the assembly of this nibbles is just a simple smear of pate on some delicious crackers topped with the relish or cucumber and maybe a blob of cranberry sauce if desired.
Enjoy,
x Sheila

As part of the Irish Foodies Cookalongs (I’m a first-timer)I joined in last Friday evening to do a bit of cooking with the theme of Autumn Fruits.    Basically this is a Facebook Group that anyone with an interest in food can join and on the first Friday of every month they do a cookalong with a theme.  The idea is to tweet as you prep and cook and to do a write-up on your efforts which you then share with the group.
Fridays are generally leisurely enough in my house however last Friday was a little bit busier than usual.  The twin girls had a camogie final (which they won!) and I was due at a neighbour’s house for a party at the same time as the match.   The evening went as follows: kids home from school, kids fed (kinda), prep ‘twooty fruity’ party food, find girls gear for match, drop off food en route to match, win match, return, demuck and unwind at party.
I decided to make some savoury pastry parcels with a hit of autumn fruit.  I was unsure if Rhubarb qualifies as an autumn fruit and googled to find that it grows in Ireland from April to September so it just about squeezes in there.

I decided on 1) Black Pudding, Onion & Apple Puff Pastry Parcels and 2)Goats Cheese, Rhubarb, Ginger and Apple Filo Parcels.
There is very little cooking involved here as I use shop bought frozen pastry however I have to warn that the assembly is fiddly and takes longer than you would think.
Clonakilty Black Pudding, Onion & Apple Puff Pastry Parcel:
You will need:
Clonakilty black pudding (about half)
1 tbsp vegetable oil
1 small onion
1 cooking apple
1 tbsp caster sugar
Puff Pastry (defrost in the fridge overnight)
1 egg for brushing
Method:
Pre-heat the oven to 200C
Core, peel and chop the apple.
Stew the apple in a saucepan with a tbsp of caster sugar and a splash of water until it begins to soften but still has bite.
Take off the heat and allow to cool.
Peel and finely chop the onion.
Heat the oil in a frying pan over a medium heat.
Slice the black pudding into rounds and fry on one side.
Turn pudding over, add the onion and cook until pudding is cooked.
Remove the pudding and onion from the pan and place in a bowl together and mash with a fork.
Open up the pastry sheets and use a knife to cut each sheet (there are usually 2 sheets in box) into nine squares.
Place a mound of apple on each square and top with a mound of pudding.
Beat the egg and use a pastry brush to wet the edges of each parcel.
Pull up diagonally opposite corners and stick together with the egg (fiddly bit).
Place the parcels on a baking tray and brush over the pastry with more egg..
Cook for approx 20 minutes in the oven until nicely puffed up and brown.
Serve warm with a blob of stewed apple on the side.

Goats Cheese, Rhubarb, Ginger & Apple Filo Parcels
You will need:
Goats cheese
Filo pastry sheets (defrost in fridge overnight)
Stick of rhubarb
Small piece of fresh ginger
1 tbsp caster sugar
1 egg – for brushing
Stewed apple (see above recipe)
Method:
Pre-heat the oven to 200C
Rinse and slice the rhubarb into small pieces.
Peel and grate the ginger.
Stew the rhubarb and ginger in a saucepan with a tbsp of caster sugar and a splash of water until it begins to soften but still has bite.
Take off the heat and allow to cool.
Slice the goats cheese into small rounds
Open up the pastry sheets and use a knife to cut each sheet into 4 squares.  Work with one sheet at a time.
Place a round of goats cheese on each square, just in from one edge and top with a blob of rhubarb and apple.
Beat the egg and use a pastry brush to wet the edges of each parcel.
Roll the pastry like a spring roll and fold in the edges brushing with egg to stick.
Place the parcels on a baking tray and brush over the pastry with more egg.
Cook for approx 20 minutes in the oven until nicely browned.
Serve warm with a blob of stewed rhubarb on the side.

Leftovers reheated well the next day so these could be made in advance.  Enjoy.
Til next time, Sheila.