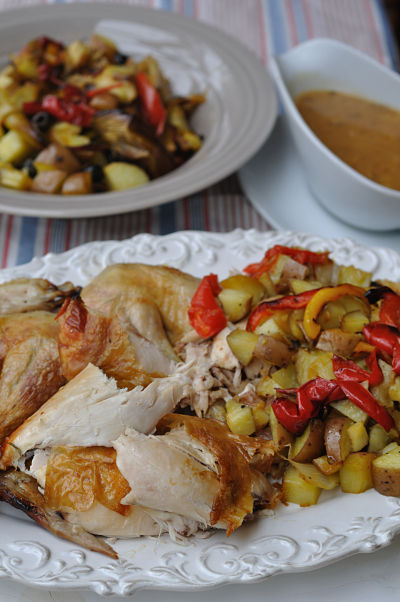 There’s a lot to love about Nigella Lawson’s latest TV programme – Nigellissima (BBC2) and there’s a little to despise which makes it compulsory viewing if you’re about to partake in a foodie gathering anytime soon.  Even if you’re not bothered on forming an opinion you’ll watch it to admire, scoff, loath, eye-roll and covet.  Yes covet, you will covet firstly perhaps her flawless skin, next of all her amazing kitchen and don’t even dream of stepping outside into the garden as you’ll trip up with exotic plant envy.

Then there’s the larder.  No wonkily hinged cupboard doors here I can tell you and no fear of being knocked out by an unbalanced sugar bag teetering dangerously close to the edge of the top shelf.  This is no ordinary pull-out larder this is a Nigella Lawson walk-in larder (whispered coquettishly in M&S ad dulcet voice).  There are pasta sections, copious assortments of grains and even a trunk of compartmentalised liquorice – cue eye rolling. The recipes sway from the accessible e.g. Italian Roast Chicken to the less so e.g. Saffron Orzotto and inspired as they are by her love of Italy they have come in for heavy criticism from the purists.

My peeve with the programme is not in the food but in the over-scripting.  Words are beautiful things and Nigella has a poetic craft of them on paper which in my opinion does not translate to the spoken word.  No matter how posh or well-educated I can’t imagine that anyone anywhere has ever had cause to use a phrase such as  ‘venerable volumes’ in what’s supposed to be a casual welcoming chat with you the viewer through the camera.  If you’ve watched the show I’d love to know what you think.
I tweeted this link recently which if you’ve seen the programme may amaze you as it shows how the set for Nigellisima is a studio built replica of Nigella’s own kitchen and plants were kept alive without natural light.
Here’s Nigella’s Italian Roast Chicken recipe accompanied by my own Rustic Potatoes and Gravy.

Note:
Nigella served her chicken with the juices in the pan but I found that there wasn’t enough and gravy was called for, I also found that the olives charred and this may have been because my tin wasn’t large enough to ensure they were coated in oil and cooking juices.
Serves 4-6.
Italian Roast Chicken:
You will need:
1 large chicken
1 lemon
4 springs rosemary
3 leeks
2 red peppers1 yellow pepper (Nigella uses an orange one as well – I thought 3 plenty and couldn’t find orange one!)
100g olives (pitted) (Nigella specifies black, I used a mixture)
4 tbsp olive oil (I used rapeseed oil)
salt & pepper
Method:
Preheat the fan oven to 180C/Gas Mark 6.
Remove any trussing string from the chicken so the legs are loose and you can stuff the cavity with the lemon cut into two halves and two of the rosemary sprigs.
Place chicken in the centre of a large roasting tin.
Wash and chop the leeks into three chunks and slice lengthways.  Deseed the peppers and slice into strips.
Place the leeks and peppers in the roasting tin around the chicken.  Scatter in the olives and drizzle the 4 tbsp olive oil over everything, tossing in the remaining rosemary sprigs and then seasoning with salt and pepper.
Cook the chicken according to it’s weight, a 1.5kg will take approximately 1 and a half hours.
If you are cooking the rustic potatoes (below) put them in the oven a half an hour before the end of the chicken’s cooking time.
When cooked place the chicken to rest on a carving board and allow to rest for at least 10 minutes.
Now would be a good time to make the gravy (below) if desired.
Once rested break the chicken up into portion sizes and serve on a large platter with the roasted vegetables.
Rustic Potatoes
You will need:
8 medium sized potatoes
2 tbsp rapeseed or olive oil
sprig of rosemary or half teaspoon dried
Method:
Chop the washed potatoes with skin left on into small cubes.
Scatter onto a large  baking tray and drizzle over with the oil and picked or dried rosemary leaves.
Bake in the hot oven for 30 minutes.
Gravy:
2 tbsp flour
400ml chicken or vegetable stock
Method:
With the chicken and vegetables removed from the roasting tin place it on a medium heat on the hob.  Add in the flour and use a wooden spoon to mix it with the juices in the pan scraping up any flavoursome pieces from the bottom.  Stir to cook the flour for 2 minutes.
Gradually add in the stock, whisking steadily and briskly as you do to avoid lumps.  Raise the heat to high, bring to the boil then reduce to a simmer for 5 minutes.
Enjoy.
‘Til next time, Sheila.