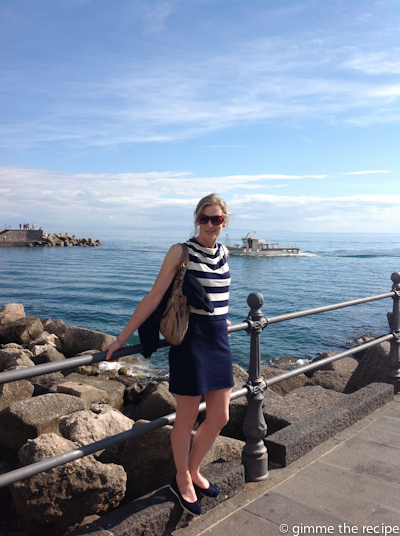 4 nights in Sorrento followed by 2 nights in Rome made for the perfect Autumn break. Temperatures hovered around 22 degrees and the rain stayed away.

Arriving into Rome from Dublin around 11am on 15th October, we picked up our hire car and were on the road towards Napoli by 12.30.

About an hour down the road peckishness saw us pulling into a roadside service station and sitting down to some deliciously fresh-baked bread, cheese, tomatoes and parma ham. Not a chip in site!

Onwards we weaved through precarious traffic, by-passing Napoli and easing though long tunnels until we arrived at Grand Hotel Capodimonte in Sorrento.

A sprawling 4 star hotel we stayed here comfortably in a superior double room for 4 nights.

Darkness falls early in the Autumn and we strolled 5 minutes from the hotel into historic heart of Sorrento to dine around 6.30pm in darkness. Eating here turned out to be a mistake and a very disappointing start to our dining in Italy but the gelato from one of the many close-by gelaterias made up for it somewhat.

On return to the hotel we sojourned to the comfortable lounge, for nightcaps and the reveries of the piano player – self-service snacks – crisps, nuts and olives saw us greedily scoffing before bedtime.

We rose early and hit the road after a robust breakfast. Indentations of my fingernails are probably still in the armrests of the Mercedes car rental.  We rounded bend after bend ignoring rockfall warnings to wend our way to Amalfi. How splendid! This beautiful little village pivots around a magnificent focal square, steps lead up to the Duomo and we quite by chance ate our pastries of the day at the renowned Pansa. Superb. As we munched, a jazzy quartet performed L’Americano and flogged their CDs – such a perfect experience I felt like I was in the middle of a movie.

Heading back along the peninsula we stopped off at picturesque Positano getting briefly lost en route we eventually risked driving right down into the heart of Positano for parking and were successful. I couldn’t imagine attempting this at high season as it is busy enough off-peak.

White-washed walls it is almost too picture perfect to be real with lane after meandering laneway filled with boutiques, jewelers, cafes and restaurants. Emerging out onto the stoney beach where a bride and groom were being photographed there’s a mystical feel to Positano.

Indulging in a delicious pizza down by the beach and basking in sunshine I once more quaffed prosecco followed by some delicious local Fiano.

Back in Sorrento we treated ourselves at Raki Gelato which promises high quality ingredients, 30% less sugar and delivers on taste.

As Ireland were to play Argentina in the world cup quarter rugby finals at 2pm on our 4th day, our trip to the isle of Capri had to be early and brief. We ferried over in 30 minutes and started to walk upwards towards Anacapri – after 15 minutes of swift walking I gazed upwards, balked and demanded to finish the rest by taxi – an open top ride overlooking a spectacular drop we rose higher until our destination was reached. You could go higher on foot or by chairlift – my husband chose the latter and I being as vertiginous as you’ll get chose to rise no further and happily explored Anacapri.

Once more a pizza was ordered this time at the square in Capri followed by a  wander around the designer-heavy laneways – window shopping only!  I would have loved to have swam in the sea but time was against us and we returned to Sorrento to sit in the sunshine outside an Irish bar and watch Ireland’s dream fade and give way to the Argentinians.

That evening our Michelin Star dining experience at Grand Hotel Hotel Excelsior Vittoria in Sorrento was exquisite. Treated like royalty I had courses that featured duck, rabbit and lamb while my better half went for numerous fish courses that featured on a five course taster menu. I shared his dessert and he regretted dividing the lemon pie. Finishing off with the petits fours, what a treat.

Breakfast at Grand Hotel Capodimonte was included in our fare and my husband who travels a lot proclaimed it the best breakfast experience he has had. A chef mans the omelette section where you can request eggs whichever way you choose, accompaniments are bacon, tomato and cubed fried potatoes. There’s a coffee station, a juice station even a prosecco area! Continental breakfast choices of various cheeses, meats and breads abound. Naturally there’s a condiment section housing a vast selection of confitures and even a churn of nutella – my children would have been in heaven, and lets not forget the pastries.

Departing around 11am we headed back to Rome, refuelling the car on the outskirts and depositing it back to the airport where we joined a busy taxi queue to central Rome – White City registered taxis charge a flat fee of 48 euro to the centre. We queued for around 30 minutes and another 25 minutes or so saw us deposited at the door of the Hotel Forum. This time my husband left the imprints of his nails in the armrests of the taxi! Every drive in Italy is a game of chicken.

Up the Via del Corso we rambled veering off to inspect the maintenance works underway at the Trevi Fountain and then onwards to the similarly cordoned off Spanish steps – pizza once more followed by chocolate ice-cream.  Every corner you turn in Rome conjures up monuments and magnificent architecture and a history lesson if you choose to take it.

Drinks at our rooftop bar later were monumentally expensive and one was enough for our wallet.

The rooms at Hotel Forum are tight on space but perfectly adequate, scrupulously clean and meet all requirements. Being situated centrally is invaluable in Rome and I wouldn’t contemplate staying on the outskirts.

Up early and across the road to be fleeced by a bill of 50 euro for breakfast! I only had juice, a chocolate croissant and a cappuccino – he had the works of a fry up a juice and a coffee – it turns out the orange juice was a majestic 8 euro a freshly-squeezed glass!!!

Fortified we trekked Rome for hours – The Colosseum, followed by the Forum (the place that most catches my breath in Rome), the Mouth of Truth – Bocca della Verita – then a wonderfully quiet stroll along the upper banks of the gushing Tiber – briefly onto the Island – Isola Tiberina – and then redoubling our steps to find ourselves joining the security check queues to visit St Peter’s Basilica. Knowing what I know now I would recommend purchasing of ‘Priority’ tickets at 25 euro for the Sistine Chapel at the Basilica before you leave. The Sistine is housed somewhere through the maze of the Vatican museum – we queued for 30 minutes to pay 18 euros on entry – I think the priority would have seen us getting in in 10 though I could be wrong. My head was wrecked by continuous touting in the queues, reared to be paranoid I don’t do touts and ignored their warnings that we would be queuing for an hour and a half – a lie as it turned out. Once in the door of the Vatican museum we followed arrow after arrow pointing towards the Sistine. You entered a room lined with magnificent tapestries and artwork, then another, then another, looking up ceilings were adorned – are we there? I queried continuously as we slowly shuffled along in a heap of people, turning to my husband I declared ‘this is just another really fancy queue’ as the twists and turns eventually led us to the Sistine – instead of being spectacular instead it was a relief, a box ticked, yes, we got there, we saw it, it’s done.  There is only so long that you can stand and look up. Next!

Next was better. Next was the picture museum that houses more works of Da Vinci, Bellini et al but for me the highlight of my trip to the Vatican was Carravagio’s ‘The Deposition’ – the depth, the darkness, the light – Wow!

Heavy legs walked away from the Vatican to locate the Piazza Navona and the Pantheon, that opening to the heavens is my third Wow of Rome. Crane your neck, stand and gaze upwards in wonder and awe – how did something like this get designed so very long ago and how is it still standing?

With a most useful guidebook under my arm borrowed from my friend Abina, ‘Top 10 Rome’ an Eyewitness Travel Guide, we selected to dine and wine at close-by winebar ‘Cul de Sac.’ Delicious white wine from Sardinia came recommended for me along with a fruit-laden red for him. I dined on delicious duck ravioli and he had the Sicilian pasta. To finish, the tiramisu was shared.

There must always be a last day and this last day left me in the knowledge that Rome will never be ‘done’. We must return, and return, and still I know it will never be done. Keats-Shelley House was paid a visit, a leisurely hour was spent in Babington tea shop and then a search in vain to visit more Caravaggio’s as the church Santa Maria del Popolo was not re-opening until 4pm a time at which we were taking our leave.

Departing Leonardo Da Vinci airport at Fiumicino 18km outside Rome was a bizarre experience. We went through security towards Gate G as indicated on the boards, stopped to shop and then went to find the gate number which turned out to be a bus trip to area G with more shops and then another bus ride to the plane. I’m a bit of a time freak where airplane trips are concerned and always leave ample time for contingencies which in the case of our departure from Rome was just sufficient.

This is my second trip to Rome, I’ve also visited Tuscany, Milan, Portofino and Sicily. Italy is a magnificent country. Beautiful. The food and wine generally are incredible. Next on my list is a trip to Puglia, I really, really want to visit there but I also want to revisit Rome. It will probably be quite some time before I return but I cannot wait. Everyone should have the opportunity to sample La Dolce Vita.

Italy is waiting for you – just Go!

‘Til next time, Sheila.