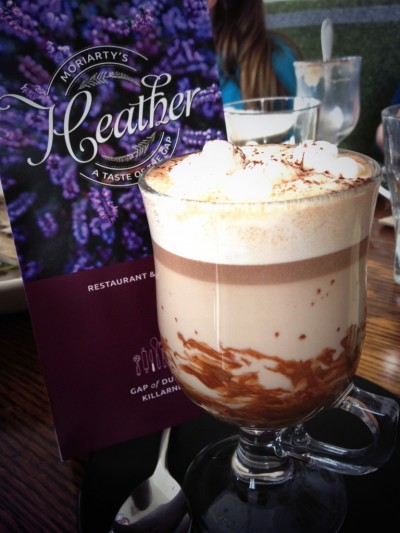 We needed a break.  We really neeeeeeeeeded a break. And after 3 nights away in Killarney we got that and more.  It was fabulous.  A complete change from the norm and a time to switch off from work and switch on to fun and the good things in life.  I’ve been thinking about it from time to time since we’ve been back and every aspect of it has me smiling.
With 5 active kids going with us (the sixth being 17 had other plans including a party at ours which was scuppered – the less said the better!!!…) anyway 5 kids very close in age are not enjoyable in close proximity – we’ve done the camping trip to France – NEVER again.  I’ve learned the hard way that for us to have a peaceful happy break the kids must be kept busy.
Accommodation is often the tricky bit, I want the decadence and facilities of a hotel with the space of a house and after a little research we came up with the perfect place to stay in Killarney.  The holiday village situated just behind The Malton Hotel car park and next to the leisure centre and tennis courts was ideal.  We booked the 4 bedroom house which has adequate living space and cooking facilities and two of the bedrooms are en suite.

Staff at The Malton were so lovely and welcoming and the hotel was buzzing with weddings and holiday makers coming and going.
On the doorstep of the Killarney outlet centre we naturally fell in there on one of our passings and I invested in a Nike rain jacket for our kayaking & cycling trips as being Irish a rain jacket was not something that I owned!! The kids got new trainers and football boots and my husband nabbed himself a new pair of trainers too.
The first activity I had arranged was Pitch & Putt at the DeerPark grounds in Killarney.  We played that on the Friday afternoon of our arrival and the afternoon turned out to be a bit of a scorcher – that’s 20 degrees in Ireland. 18 holes later I was marginally less useless than when I had started but I enjoyed it nonetheless.  Back to the hotel and a quick swim later found us relaxing in The Punchbowl Bar of the Malton hotel.  Food was top class and the surroundings while luxurious are relaxed and not at all stuffy, ideal for dining with children.

I rose early on Saturday and prepped a fry up and after a quick scout around Ross Castle we were hitting the Lakes of Killarney at 10am in Kayaks cautiously following our guide Jason.  What a morning, it was AMAZING!  Jason was an excellent guide, we learned so much that now I would feel quite confident heading out in a kayak with kids on our own.  Stopping off for a welcome mug of tea and a bar of chocolate that Jason provided we made our way along the borders of the lake and then right out into the middle to explore the limestone caves and kayak through them. Quite the experience.  I had booked this trip with Outdoors Ireland  and would highly recommend.
With a well deserved hunger we hit Killarney and sojourned to Jam for a late lunch.  What an efficient machine it is!  Orders are quickly taken and the appeal for the starving is that there is a very quick turnaround and delivery to table of deliciously fresh food.
Later while the kids played tennis back at the hotel we left the 16 year old in charge and strolled out again.  I knew exactly where I was going.  I just had to try Miss Courtney’s Tearooms.  It is exquisite, and for me with food being the stuff of passion it may not surprise you to know that the perfection of a place like Miss Courtney’s almost made me cry with happiness.  The music, the table setting, the menu – how many teas were listed on the menu??? I didn’t count but there were plenty.  A huge slice of cake was shared and the heathen that I am I had a coffee!!

Returning to join the kids for the tennis – oh how they do love to beat their parents at everything! Appetites were slowly whetted again after another swim it was time to dress up and stroll down town for a delicious dinner at Bricín.
The Saturday had been a beautifully balmy day and there was no need for jackets that evening in Killarney where queues were out the door for Irish ice-cream at both Murphy’s and Gaelic Gelato.
Sunday saw us heading out in the morning towards the Gap of Dunloe.  I had, co-incidental with our Killarney trip, received an invitation to come and try out the Heather restaurant at Moriarty’s so that’s where we had an early Sunday lunch.  Local ingredients are lovingly treated and beautifully presented.  Its now modern transformation is quite in contrast with Kate Kearney’s up the road and if you’ve come to Killarney and want to avoid the twee then stop off at the Heather restaurant.  Everything we ate was delicious, staff were wonderfully welcoming and friendly and the interior design is just lovely.   The gardens are under development and once everything comes into full bloom it will be a spectacular stopping point. (Our coffees & pastries here were complimentary due to the invite – so Thank you to the Heather restaurant)

Next on the list of activities was cycling in Killarney National Park.  Now that might sound nice to you or just, oh yeah you went for a cycle, lovely.  This was not lovely, this was not nice. This was one of most exhilarating experiences I have ever had and I’ve been around a while.  Jay our guide with Irish Adventures geared us up with our bikes and helmets and explained the changing of the gears and then led us up one of the many paths.  This was an easy path, a wide path, a path where one of my sons decided to stop suddenly and I tipping his back wheel, keeled over helplessly and fell into a bush!!! Like driving a car into the back of someone, in cycling if you’re coming from behind, bashing into someone turns out to be your own fault.  So, not the best of starts for me and as I hadn’t cycled in 20 years I was realising I had a bit to relearn.  On we cycled sedately enough for a little until with a few twists and turns we were suddenly out in a very quiet piece of woodland on dirt-tracks.  Things were getting a little rougher and Jay pulled us into a group and taught us how to get up out of the seat and use your stance to help you braking.  We began to clamber up and down the tracks dotted with hillocks and mounds and enormous tree roots and came to a stop again at a natural dirt ramp.  Me not so brilliant at the stunts that ensued but the kids eager and loving every minute of it.  On we went again over rough terrain and for me it was tough going.  I began to get better though and I got the hang of getting out of my seat and levelling my pedals and was loving the freedom.  Back on some main paths we whizzed past groups of tourists and at some point we pulled into the side and stopped to look where Jay was pointing to the other side of a brook where a herd of red deer were quietly grazing.  It was so serene and beautiful and Jay told us lots about the deer before getting us back in the saddle again.

The remainder of our cycle had us weaving in and out of woodland.  One minute you were in the wide open, the next you were cycling along a narrow brambly path with a steep incline to the water below.  Some paths were blocked with fallen trees and on many you felt that you were the only traveller to have passed by in months.  As I said earlier – exhilarating, invigorating, a feel the fear and do it anyway experience for me.  I absolutely loved it.
As you can imagine that amount of exposure to the winds and the wilds had us starving again so it was back for a quick change of clothes and then into The Smokehouse restaurant.  Steaks and burgers were well deserved and I’ve seen description of the food here as ‘hipster’ food whatever that may be.  Like many restaurants the food is served on boards. It looks great and it is delicious.  It was too dark (thankfully) to photograph the food so that left me eagerly tucking in.  Lovely touches such as your own miniature ketchup bottle and quirky lamps and furnishings create a unique experience and have you leaving thinking you’ve been part of something ‘cool’ – doesn’t happen too often when you eat out with children.
Back to the couch in the house to unwind further with some of our own wine and read the Sunday papers while the kids went off to play tennis again.
We packed the cars on Monday and with a bit of time to kill before  dispatching the girls to Dingle for Irish college we ambled around the grounds of Muckross House and lingered in the cafe over coffees before heading into Killarney again where the girls ‘needed’ to pick up supplies.  Almost time to hit the road they needed fortification for their trip and we accidentally came across the amazing Wholesome Fayre restaurant for lunch – it’s through the alleyway next to Scotts hotel.

I’ve been back since our trip for breakfast and can’t understand why there isn’t a queue out the door.

Food is cooked to order, ingredients are delicious and the staff excellent.  The owner also has a fine dining restaurant which I’ve yet to try – West End House – so that’s an excuse for me to head to Killarney again sometime very, very soon!

Killarney.  What a place for a break.  It’s fabulous.
‘Til next time, Sheila.