‘Taste of Christmas’ Convention Centre Dublin 2010.
The kids stayed up late on Friday night (like every other kid in Ireland – big & small) to watch ‘The Late Late Toy Show’ which we all agreed was excellent.  Therefore 6 eager faces did not greet me early on Saturday morning as I attempted to prise them from their beds for what turned into a bit of an expedition to Dublin for the weekend.  Some struggled to the car half dressed and more refused to take off their pyjamas and insisted that the duvet came too.  Cork was frosty but other than that road conditions seemed fine and we half doubted that snow lay somewhere on the route ahead of us.  That doubt was put aside as conditions got fairly slow and slippery by the time we reached the outskirts of Kildare where we came across the first minor accident.  Moving further on traffic was barely at a crawl so we snuck off at a slipway and meandered 5 miles until we came to Kildare Outlet Centre.  Revived at Starbucks we shopped away happily for a couple of hours and by the time we were back on the road normality had been restored.  We headed straight to the Convention Centre and parked and began to explore what the five floors of ‘Taste of Christmas’ had to offer.

Plenty of samples were available and the highlight for me was the opportunity to taste the fare of some of our finest restaurants including; Wilde, Pichet, The Cliff Town House, Unicorn, Bon Appetit, Jaipur, Town Bar & Grill, The Tannery, Salon des Saveurs, Swai & Langkawi.  Here is a sample of just some of the delights we savoured. 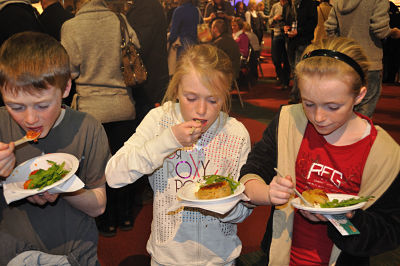 The place was bustling as we made our way up to Level 3 to the Auditorium for the Live Theatre Show.  All set to “admire the culinary flair of Heston Blumenthal” we settled into our seats and half listened as Hector O’Eochagain sat in an armchair and began to read about a star that guided………….zzzz.  The curtains eventually parted and we could see the two promising looking cooking stations, an empty dining table on the left and to the right a parlour style gathering of a couch and chairs.  Hark, what was that… a doorbell rang and in came Kevin Dundon, who after a bit of banter with Hector was then dispatched to go and find someone to dress the table for Christmas Dinner.  Soon along came ‘Franc’ who got a brief introduction and then set about dressing the table.  The doorbell rang again and this time it was Gino D’Acampo who had come dressed in his black leather jacket looking more like an extra from a ‘Grease’ production than a chef.  Hector then set the tone for Gino’s stint on stage by asking him to show the ladies a bit of flesh.  At this stage I was slumping into my seat as it got more and more torturous, we had Gino testing a strand of spaghetti between his mouth and that of a female volunteer from the audience but at least he was cooking.  Gino rustled up a quick pesto pasta which was his suggested starter for Christmas Day (no comment!).  Kevin Dundon came on stage to prepare some stuffing and then pulled a semi cremated turkey out of the oven so that we could view the finished product ( I wish I was joking).
Finally with a little dramatic smoke we had Heston Blumenthal on stage.  I sat up in my seat again and listened as Hector encouraged the audience to ask some questions.  In the background we caught a glimpse of some of Heston’s creations on a slide show and then he sat down on one of the couches and my jaw dropped.  That couldn’t be it.  Seriously?  Seriously.  God know’s what Heston thought as Catherine Fulvio then joined Team Gino and Oliver Dunne joined Team Dundon and they set about rustling up desserts with surprise ingredients a la ‘Ready Steady Cook’.  What emerged was far from Michelin Star.  The show entertained to a degree however it leaned more towards a pantomime production and I have to say I was disappointed with the lack of quality cooking.

With a final scout around the halls after the show I was being dragged away and have to mention the last stall I visited ‘Olio&Farina.’  The presentation of the display just drew me in and it was a pleasure to meet Susan Mulvihill (O&F Limerick) and Maria Payne (O&F Galway).

‘Food & Wine Magazine Christmas Show 2010′ RDS, Dublin 2010
On Sunday we sat right in front of the Chef’s Stage at the Food & Wine Magazine Christmas Show in the RDS where Paul Flynn of ‘The Tannery’ set about creating an entire 3 course meal.  His starter was a warm salad of Cashel blue, caramelised apple, red onion and almonds.  Delicately roasted stuffed poussin with polenta roast potatoes for mains was followed by roast spiced plums, oatcake, apple compote and ginger cream. 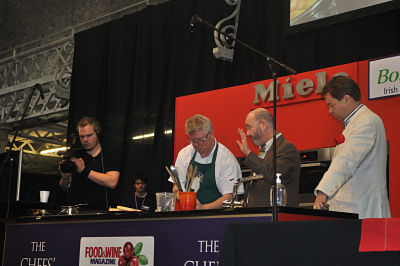 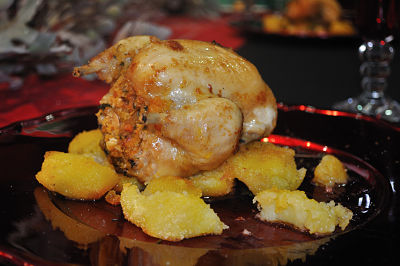 Up next in place of Dylan McGrath was Fabio Bardi of Rustic Stone to demonstrate 3 sweet dishes, the first of which was an updated creme brulee using a combination of pears and gingerbread served with a pear sorbet.  The second creation was a natural sugar (fructose) based take on a knicker bocker glory with alternating layers of jelly and creme fraiche finished off with a light berry mousse on top.  Lastly, Fabio spiced up some mulled wine and we even got to smell the liquorice as a sample was passed around the audience.
Spot prizes of wine were handed out by Raymond Blake (F&W) to those quick and loud enough to answer some easy questions from the floor.  Some lucky competition winners got to sample the chef’s creations on stage as little thimbles of Jacob’s Creek sparkling ‘Blanc de Blancs’ was gratefully sipped by the entire audience.  Ross Golden Bannon (Editor Food & Wine Magazine) kept a natural flowing conversation going with the chefs on stage and gleaned a few worthy tips for the audience in the process. 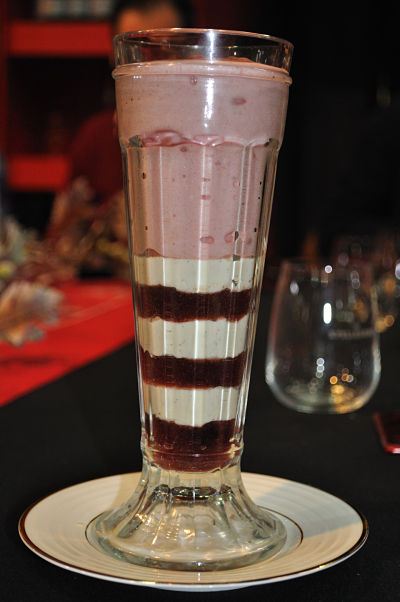 Milling around the stalls I blissfully disowned the kids as they foraged at every opportunity for samples.  With so many wonderful exhibitors it is perhaps unfair to mention just a few, but my abiding taste memories from the day came from; Cava (Galway Spanish restaurant and Tapas Bar), Dada Restaurant (Moroccan), Green Saffron (amazing Christmas Pudding), Old Irish Creamery (cranberry cheese) Nutritious Nibbles (gluten free cookies etc from Rebecca Smyth) & Moloughney’s of Clontarf (sampled delicious bites and drooled at magnificent bakery/pastry display.  A very attractive selection of flavoured oils was on offer from Jen’s Gourmet Foods and opposite that stall you had the start up French Gourmet Food Ltd., with their very attractive produce including the bottles of flavoured syrup pictured below. 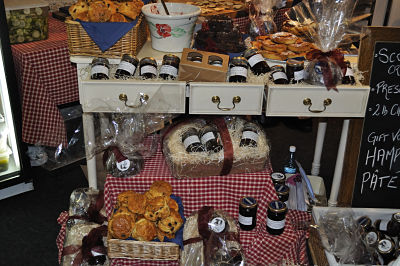 If you’re stuck for a foodie lover’s Christmas Present – Leonard Breslin of IrishFurnitureStore had some engraved chopping boards, carved black boards and fabulous Dressers on display. 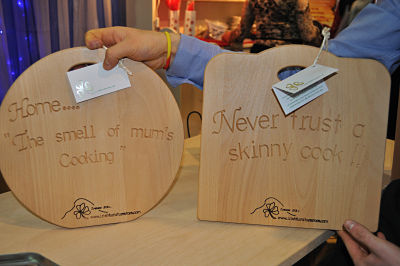 Again I had to be dragged away to hit the slippery road south and was sorry to miss Kevin Thornton and Neven Maguire who were up later in the day.  Ah, sure there’s always next year!
Til next time, Sheila.