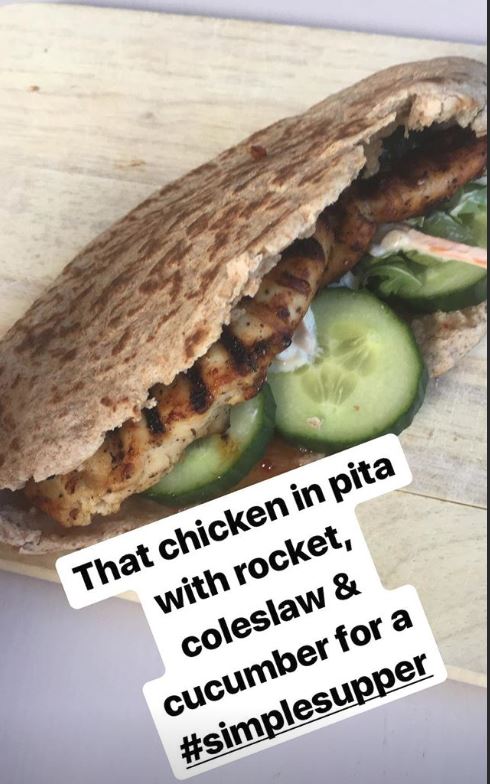 Let’s see how this goes down then.  These days I’m capturing my everyday cooking on Instagram and as I simply don’t have time to pull out my proper camera to capture images, then edit them and upload them I’m going to transfer those images directly to my blog and see how that goes.  I’m loving Instagram stories for behind the scenes and sharing a snapshot (still selective!) of real life behind the pictures.
Today’s supper needed to be quick and tasty and it’s captured in the images below.

Enjoy! Sheila.
P.S. I usually put up some video clips other images etc. in my Insta Story every day – If you haven’t found me yet I’m at https://www.instagram.com/gimmetherecipe/ {& if you’re new to instagram if you want to see my story (changes every 24 hours) click on my profile picture at the top when you get there…!} 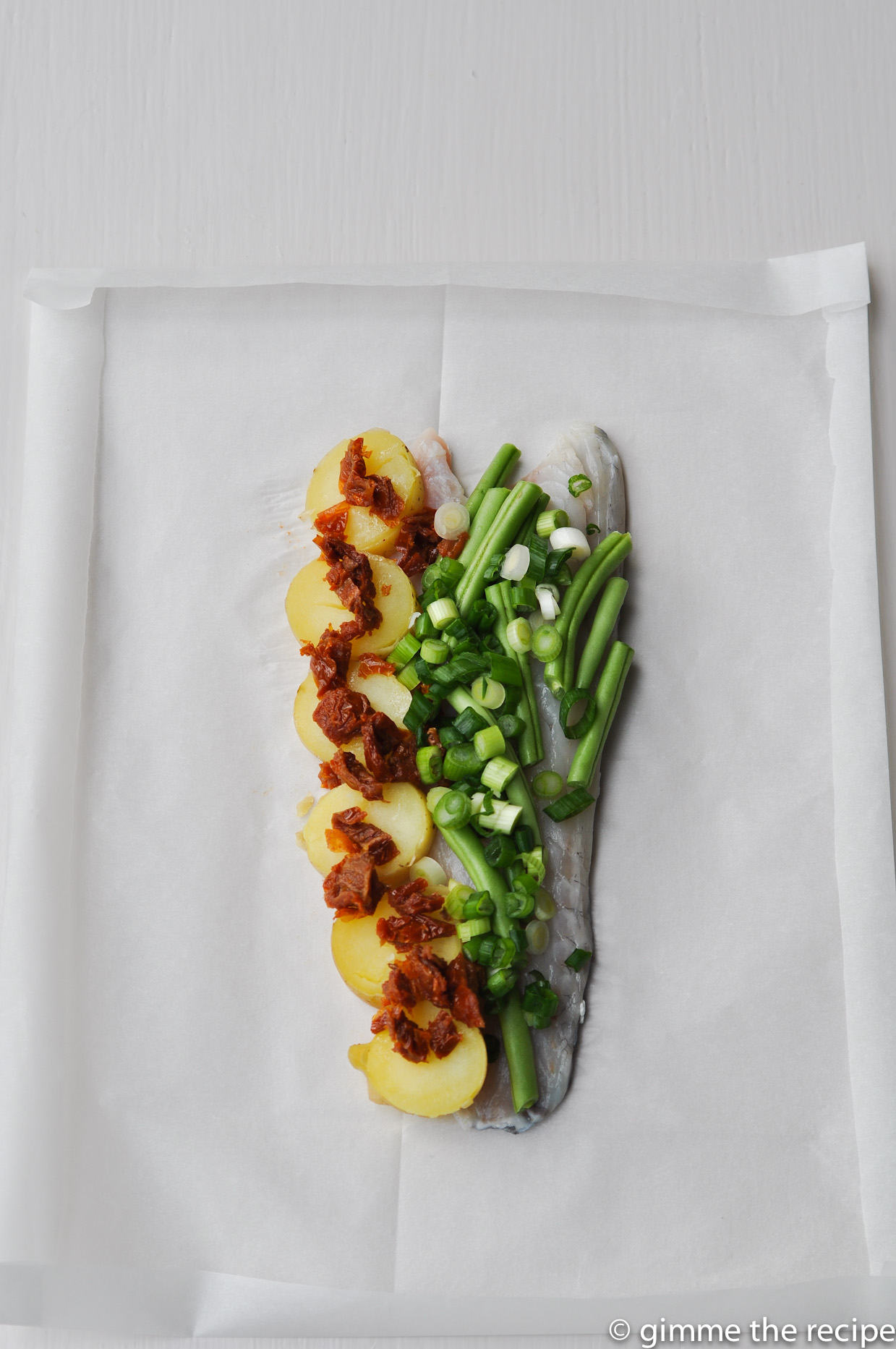 Sea Bass Parcels
We’re getting there!  Week by week inching closer to the revelry and indeed you may be contemplating some in-house entertainment in advance of the festivities yourself.
In need of a no hassle but grown-up dinner party recipe?  This is it.  No-one wants to be entertained by a flappy flustered chef who is so bothered with timings and enslaved to stirring that they don’t get to sit down and enjoy the company.  Don’t be that chef.  Be prepared!  Make a couple of dips/hummus etc. the night before.  Get in a good selection of cheese and crackers for your cheese-board, a delicious box of good chocolates – no-one needs or wants a heavy dessert – and of course some amazing wine and you’re sorted apart from the mains which I guarantee you is easy.
Note:  Cooking everything as described below in a parcel is obviously the easiest but be warned the green beans will be super al-dente, so if you have an audience of veggie lovers this won’t be a problem if however they are heathens you may wish to cook them separately.

Sea Bass Parcels
Serves 4
You will need:
250g baby potatoes
4 sea bass fillets
100g slow-roasted cherry tomatoes (deli counter or just use sun-dried tomatoes if cherry not available), drained and chopped
100g fine green beans
4 spring onions
4 tbsp Sauvignon Blanc or any white wine that you like to drink
Method:
Preheat a fan oven to 200°C. Cut out four 30cm square sheets of baking paper.
Par-cook the baby potatoes, skin on, in the microwave for 4 minutes and set aside.
Place the four sheets of paper on the worktop and place a sea bass fillet in the centre of each one.
Slice the baby potatoes and place them close along one side of the sea bass.
Scatter the drained, chopped slow-roasted cherry tomatoes over the potatoes. Halve the fine green beans and finely chop the spring onions and scatter them on top of the sea bass fillets.
Pour 1 tablespoon of white wine over each fillet.
Fold the edges of the paper in by 1cm all round to stiffen the paper. It should still be a large square. Bring in the two opposite sides to meet and fold them together, then fold in the top and bottom ends. You want a little room in the package for steam to circulate but not escape. Place the parcels onto two baking trays, two parcels per tray.
Cook in the hot oven for 10 minutes, then swap the shelves and turn the trays around and cook for 5 minutes more.
Bring the parcels straight to the table for your guests to open themselves.
Enjoy!
‘Til next time, Sheila. 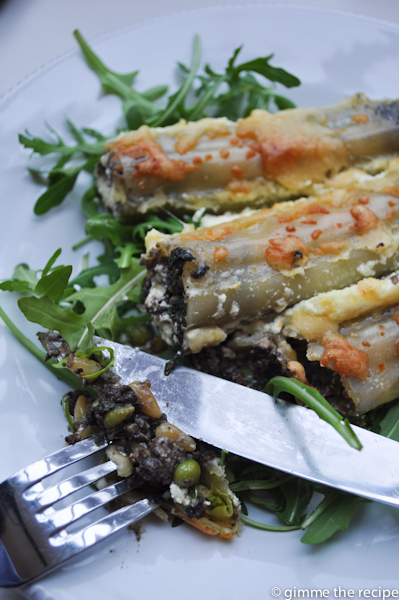 Want to try something different with pasta? Cannelloni.

Be warned though, it took me ages to get the filling into the dry pasta tubes using a teaspoon so an icing bag might be advised to speed up filling the tubes.  I spooned the filling in then used the back of the spoon to push it in and then the leg of the spoon along with fingers to push it right in.  It was tedious so next time I’ll be trying a piping bag.

The filling is delicious and simple to make.  Black pudding is having a bit of a moment as a ‘super-food’ and it’s always been a firm favourite in our house anyway.  What I love about this meal along with the taste is the speed of preparation, there is nothing to be chopped other than wilted spinach which is a cinch.  Another cheat is the creamy sauce, instead of labouring over a bechamel I combine creme fraiche, milk and mustard to pour over the cannelloni and then crumble over some cheddar, again super fast and easy, just what you want.

Black Pudding & Feta Cannelloni.
Serves 4.
You will need:
1 tbsp rapeseed oil
Black pudding – 280g approx
100g spinach leaves
100g frozen peas
50g pinenuts
Block of feta cheese – 200g approx
Box dry Cannelloni tubes (16) – 200g
Creme fraiche – 250g
Milk – 200ml
1 tsp English Mustard
Cheddar – 50g
Method:
Pre-heat a fan oven to 180C.
Heat 1 tbsp oil in a large frying pan.  Slice the black pudding into rounds and fry for 3 minutes on both sides then place in a large bowl.
Add the spinach to the empty pan used for the pudding and add a little splash of water, cover with a lid for 1 minute to wilt the spinach.  Remove the spinach to some kitchen paper and squeeze away excess moisture.  Chop the wilted spinach and add to the pudding.  Use a fork to crumble the pudding and combine with the spinach.
Wipe out the pan and dry-fry the pine nuts until turning golden – watch carefully as they will burn easily.
Meanwhile place the frozen peas in a jug of boiling water.
Once the pine nuts have toasted mix in with the pudding and spinach.
Crumble in the feta block and combine the mixture with a fork.
Finally drain the peas and add into the pudding mixture and mix well.
Use a whisk to combine the creme fraiche, milk and mustard in a jug/bowl and set aside.
Fill the cannelloni tubes either using a piping bag or a teaspoon, packing the mixture right in.
Place the stuffed tubes in a baking dish, pour over the creme fraiche sauce and grate over the cheddar.
Bake in the hot oven at 180 for 20 minutes and then turn down to 160 for a further 20 minutes.
Great served with a simple green leaf salad.
Enjoy!
‘Til next time, Sheila