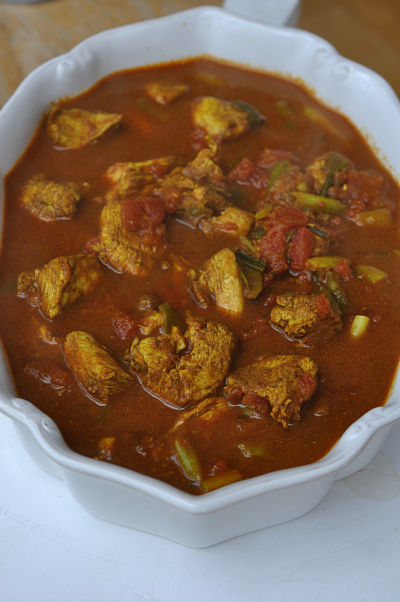 What originally started out as a ‘biryani’ transmorphed into a good old curry when an instruction or two into Lorraine Pascale’s ‘Lazza’s lamb biryani’ recipe I realised that the recipe is indeed unfinished and the reader/cook is left abandoned with browned meat.  She turns her attention to cooking coconut rice pumped up with sundried tomatoes and herbs and the meat is never again mentioned in the dish.

I’ve googled the recipe a bit and what turns up is some other confudled cooks left with half-cooked dishes.  So what does one do, one improvises.  With no mention of liquid in the ingredients list it would appear that this would be a dry dish which in my household would not go down well with he who shall remain named as The Gravy Man.  An addition of tomatoes and chicken stock merged with the spice dusted chicken to produce a wonderfully aromatic and moist chicken curry.  I’ve since cooked it for a girls night in, trebling the quantities below ensuring plenty of leftovers.  Leftovers are a very good thing when this cooking girl is feeling precious on the day after such a gathering.

The fact that there is a half-finished recipe in Lorraine Pascale’s ‘Fast, Fresh and Easy Food’ only endears me to her further.  I’m often asked which cooks I like and what cookbooks I use and Jamie will always feature among my favourites along with Nigel Slater who is the food writing Deity in my opinion and now Lorraine is up there too.  They are my Culinary Trinity at the moment.
I am loving Lorraine for her practicality and oneness with us ‘normal’ people.  What other chef would admit to this : ‘I am not at all embarrassed to say that on many occasions I have returned home to the waiting party laden with food that just needs a simple peeling back of the plastic and a slight turn of the oven dial…’  Three cheers for Lorraine, I love her.

Lorraine’s lamb biryani dish started off with 500g lamb chump steaks so go with that if you would rather a lamb version.
Feeds at least 6 hungry people.
Chicken Curry
You will need:
1 tbsp olive oil or rapeseed oil
5 cardamom pods
2 tsp garam masala
2 tsp ground turmeric
1 tsp ground cumin
1 tsp hot or medium chilli powder
1 bunch spring onions
6 chicken breasts
400g tin chopped tomatoes
250ml chicken stock
Small handful fresh coriander
Method:
Bash the cardamom pods using a pestle and mortar (or whack with a rolling pin if you don’t have one) to release the seeds and then discard the husky outer pod.
Heat the oil in a large deep pan over a medium heat and add in the cardamom seeds, garam masala, turmeric, cumin and chilli powder and cook for a couple of minutes.
While the spices cook cut the chicken into bite size chunks and chop up the spring onions (green & white bits)
Turn the heat up to high and then add the chicken pieces and spring onion mixing well to coat with the spices and allow the chicken to begin to brown.  (You may wish to drizzle in a little more oil if things are catching too much on the bottom of the pan.)
After a few minutes cooking the chicken in the spices add in the chopped tomatoes and the chicken stock.  Bring to the boil, reduce to a simmer and allow to simmer for 15 minutes or so.  Check your chicken pieces are cooked through before serving with a scattering of finely chopped coriander.
Suggest you serve with boiled or steamed rice and naan bread to mop up the sauce.
Enjoy.
‘Til next time, Sheila.