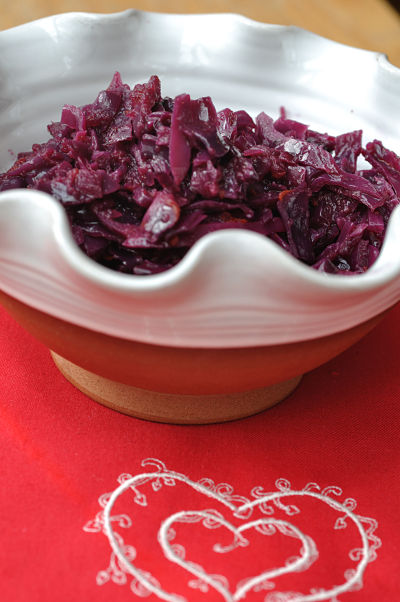 Braised Red Cabbage.  As a supposed ‘foodie’ I should perhaps be slow to admit that I have never had red cabbage as an accompaniment to Christmas Dinner.  I’ve listened over the years as friends and acquaintances raved and swapped recipes and decided at last to give it a go.  As yet I am undecided it as I have to try it with the turkey and trimmings and have only tried it solo so it’s not fair to judge just yet.

So for now this jury is out and I will post back the verdict in a comment after Christmas.  I’d love to know if you think it’s worth the effort?
Here’s a link to a recipe in Red Magazine on-line (I used Joanna Weinberg’s from the December edition of the magazine but that recipe is not available on-line.
I will definitely be looking forward to a traditional parsley, thyme and onion bread stuffing too and I may do another version spruced up with some orange zest and cranberries too.  Here’s an interesting Cranberry, Orange and Walnut version from Goodall’s of Ireland and here’s another alternative recipe for stuffing (there’s a turkey gravy recipe there too) from my blog – Mushroom & Pinenut
On mentioning Goodall’s of Ireland I must also plug their charity cookbook contributed to by Irish Food Bloggers, the digital version is available for download here and would make a welcome stocking filler for your foodie friends at a very unbeatable 2.99!! It’s for charity so go on, go on, go on 🙂
Also please let me know if you’re a red cabbage fan as I’m curious and also what side dishes you’ll be having with your Christmas Feast.
Enjoy.
x Sheila

Stuffing.  What would the stuffing below be like without the gravy?  Tasty, but dry.  It would be great in lieu of croutons, sprinkled over a dressed salad for crunch or crumbled on top of soup.  Good in a turkey sandwich moistened with cranberry sauce.  But on its own it’s lonely.  A little bit crisp on top and a little bit moist towards the centre but not moist enough to stand alone.  There are a number of things you can do if you would prefer the stuffing more moist.   You could add more butter.  You could keep it covered with foil as it cooks.  Or you could baste it with some of the turkey juices mid cooking.  Alternatively you could cook it inside the turkey but from a food safety point of view this is not something I would recommend.  If you are going to stuff the bird, make sure the stuffing is completely cold before you do so.  Cooking a stuffing this way will render it moist but in my view it has no texture but that’s a matter of taste and choice.
The ultimate solution to moister stuffing is to accompany it with a delicious gravy and that’s what I’ll be doing.    The quantity of gravy here should serve 6 people however some people pour it on like it’s a soup, (that’s you Gravy Man), so it’s best to double the quantity and have plenty for leftovers which will reheat perfectly in the microwave.

When the turkey is removed from the pan there should be plenty of juices and fat remaining.  I’ve seen programmes where people put ice cubes into the pan which will cause the fat to come to the top and they skim it off before using the juices which is a good tip if cholesterol is an issue.  For the moment I’m living dangerously and hoping that some red wine will thin the blood a bit instead.
My method for making the gravy is one that I have learned from my mother.  It’s simple and failsafe.  In the recipe here I’m using chicken stock as the liquid but you can also use the water drained from boiled carrots which is generally lovely and sweet.

Turkey Gravy
You will need
Turkey juices in the roasting pan (3 to 4 tablespoons – you may need to pour some off.)
1 to 2 tbsp flour
500ml chicken stock
Method
Start with the juices from the turkey in the roasting pan and put it on the hob over a medium heat.
Using a wooden spoon stir in enough flour to form a paste.
What you are making here is known as a ‘roux’.
Scraping up any caramelised juices at the bottom of the pan will add flavour and colour to the gravy.
You cook the ‘roux’ until it’s a golden colour, (1 to 2 minutes)
Turn up the heat and gradually add in your stock, stirring continuously as it thickens.
Once it comes to the boil reduce and simmer to thicken further.

Mushroom & Pinenut Stuffing
You will need
Half a medium onion
100g butter
200g breadcrumbs
50g pinenuts
250g mushrooms
1 tsp dried thyme
Method
Pre-heat oven to 190C / Gas Mark 5
Finely chop the onion.
Melt the butter in a saucepan over a low heat.
Add the onions and put the lid on the saucepan to allow the onions to soften and sweat for 5 minutes.
Meanwhile wash and chop the mushrooms.
Dry fry the pinenuts in a hot frying pan for 1 minute, tossing them until golden.
Add the chopped mushrooms to the onions and cook for 2 minutes.
Take the saucepan off the heat and stir in the breadcrumbs, thyme and pinenuts.
Transfer the mixture to a baking dish.
(Allow the stuffing to go completely cold if you are going to be stuffing the turkey.)
Bake covered with foil for 40 minutes and bake uncovered for the final 10 to crisp up the top.
Enjoy.
Til next time, Sheila