This salad makes a great side dish and I used it to accompany this Cauliflower, Courgette and Goat’s Cheese Pizza.
The cinnamon dusting on the butternut squash before roasting ups the flavour stakes. 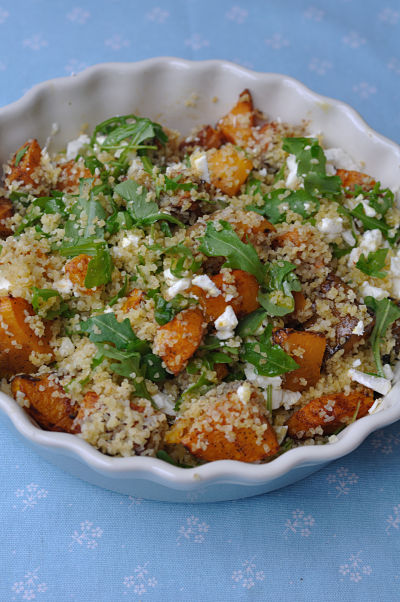 You will need:
Butternut squash
Rapeseed or olive oil
half teaspoon ground cinnamon
250g bulgar wheat
1 tbsp cider vinegar
1 tsp honey
100g crumbly cheese – recipe says Blue ,I used Feta
75g rocket leaves
Method:
Preheat the oven to 200.
Peel and cut the butternut squash into chunks and toss in a roasting tin with 1-2 tbsp oil and dust with the cinnamon.  Put in oven to cook for 40-45 minutes.  Remove from oven and set aside.
Put the bulgar wheat into a cup, check the level, then put it into a bowl and fill the cup to the same level with boiling water and pour it onto the bulgar wheat and cover with cling film.
Whisk 3 tbsp olive, 1 tbsp cider vinegar and 1 tsp of honey together in a small bowl.
Once the bulgar wheat has soaked up the water remove the cling film and fluff it up with a fork.
To assemble the salad, add the roasted squash crumbled cheese, rocket and dressing to the bulgar wheat, mix gently and serve.
Enjoy,
x Sheila.