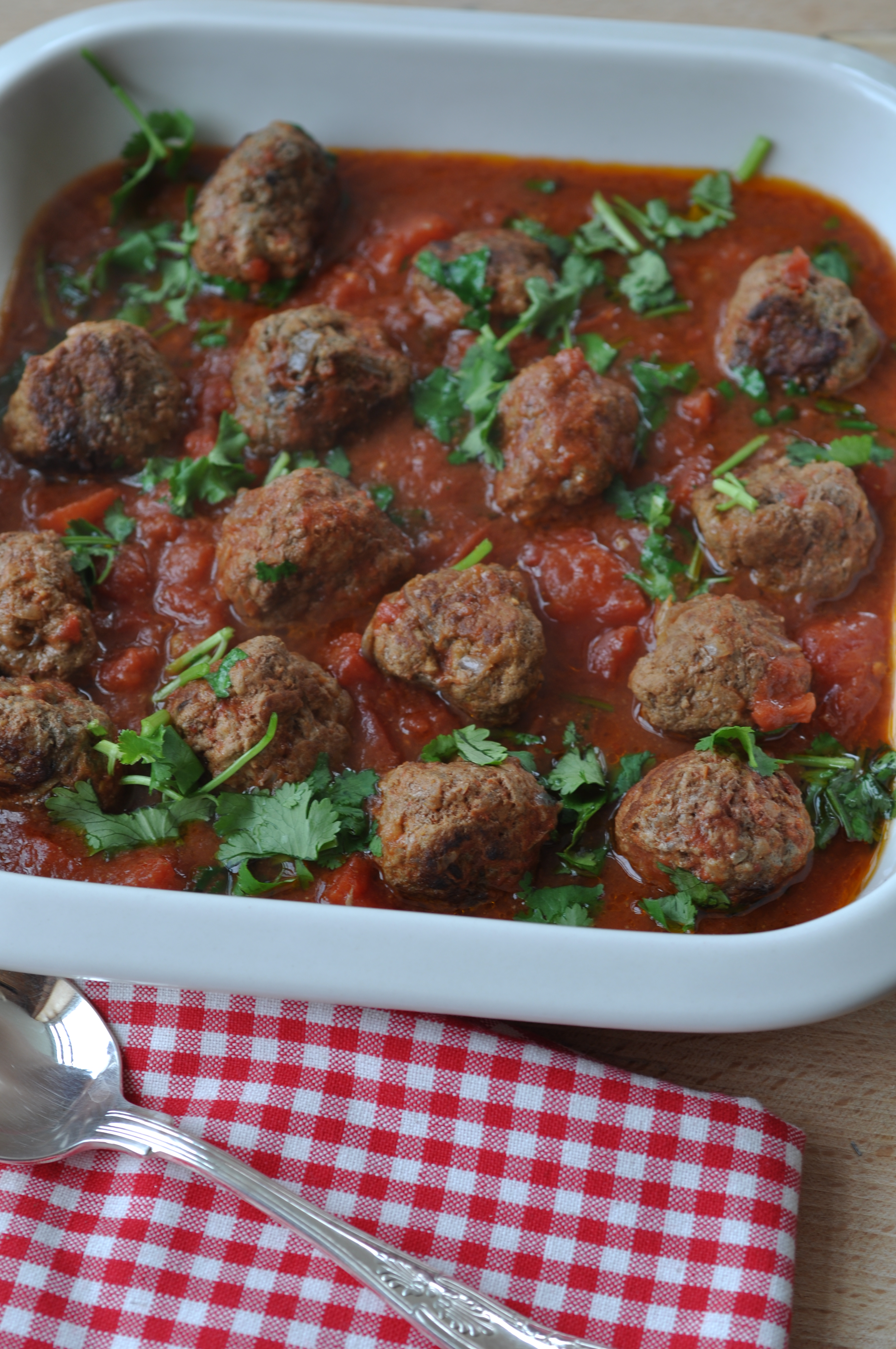 So why would I call this meatball dish Moroccan then?  When I cook with lamb and spices like cumin and cinnamon I think of Middle Eastern or North African cooking so there you have it, the simple explanation is that it just makes me think of Morocco or Moroccan cooking.  Though I’ve never been to Morocco and neither have I eaten in a specifically Moroccan restaurant so I have absorbed this probably mostly from cooking programmes.  There definitely was a Jamie Oliver one where he was in Morocco and oh let me tell you the spice markets are amAAAAAAAzing there.  And how would I know – because I saw it on the telly of course.

The secret is the cinnamon I think.  It’s something that Westerners traditionally associate with sweet dishes, particularly with apple dishes likes pies and crumbles.  It sets these meatballs on a more exotic path than the Italian one’s that we’re more used to.

This recipe is from my first cookbook ‘Gimme the Recipe’ – I haven’t cooked it in ages and it will be gracing my table this week.  Perfect warming Autumnal fare.  I hope you get a chance to try it sometime too.

You will need
1 large red onion
3cm thumb-width piece of ginger
3 garlic cloves
1 red chilli
2 tsp ground cumin
1 tsp ground cinnamon
800g minced lamb
1 tbsp olive oil
2 x 400g cans plum tomatoes
250ml chicken stock
Handful of fresh coriander to garnish
Method:
Peel and roughly chop the red onion, ginger and garlic, and blitz together with the deseeded chopped chilli, cumin and cinnamon in a mini chopper or food processor to create a spicy paste.
Use a fork or your hands to mix the lamb with half of the spicy paste in a bowl and then shape them into meatballs the size of golf-balls.
Heat the olive oil in a large pan over a medium heat and brown the meatballs.
Push the meatballs to the sides of the pan and cook the rest of the spicy paste in the centre of the pan for 1 minute
Add the plum tomatoes to the centre of the pan and roughly chop them with a knife. Add the chicken stock and stir to combine with the tomatoes, paste and meatballs.
Bring to the boil then reduce to simmer for 25–30 minutes. (Test the centre of a meatball to check that it is cooked through.)
Serve with a sprinkling of chopped fresh coriander and Moroccan couscous or rice.
Enjoy! Sheila