The next time you need to stock a cheese board, you can smugly load it with these goodies in the knowledge that they were good enough for HM Queen Elizabeth II.  These 4 Irish cheeses were selected by Ross Lewis of Chapter One (Michelin Star restaurant in Dublin) to serve at the State Dinner held at Dublin Castle on the occasion of the Queen’s visit to Ireland last week.

I’m lucky enough to live close to Cork City and bought all of the cheeses from On The Pig’s Back in The English Market.  I called in there last Saturday and the place was still buzzing after the Royal Visit to the market on Friday.  Every stall-holder had a story of where HM had stopped and what she had said it was great to see what a huge, visible boost it has given to the market.
The cheese biscuit of choice for the State Dinner was Ditty’s Irish Oatmeal Biscuits http://www.dittysbakery.com and according to their website they are due to be available to buy online soon.  In the meantime there are Southern stockists close to me (Ditty’s is based in Castledawson, Northern Ireland) but as yet I haven’t had a chance to try them. I have, however, tasted Gubbeen Farmhouse Cheese Oatcakes which are made by Robert Ditty using Gubbeen Cheese but they had been sold out in the market last Saturday.  Not being able to get my hands on Ditty’s oatmeal biscuits I bought some beautifully packaged Island Bakery organic Savoury Seed Oatcakes that hale from the Isle of Mull off the west coast of Scotland.

These were perhaps a bit of a rich companion with the seeds being a little competitive in the flavour department with the cheese so I would opt for plain oatcakes next time.  Having said that I did love the Savoury Seed Oatcakes and would buy them again.
The four cheeses as pictured here are : 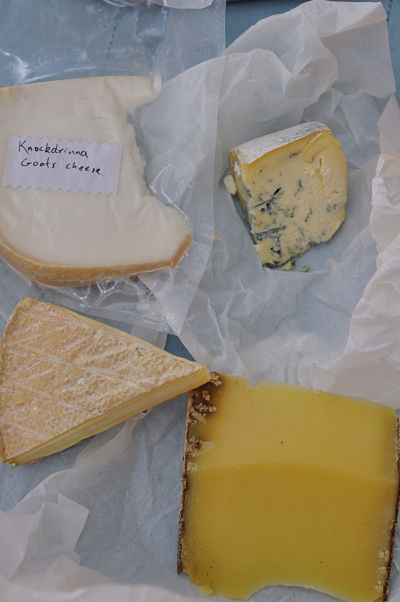 (back left) Knockdrinna (semi-firm goat’s milk cheese)***
(back right) Cashel Blue (semi-soft blue cheese – cow’s milk)
(front right) Glebe Brethan (hard comte style – raw cow’s milk)
(front left) Milleens (semi-soft, washed rind – pasteurised cow’s milk)
***NOTE***Sheridans Cheesemongers (www.sheridanscheesemongers.com) who supplied the cheese for the State Dinner informed me that the Knockdrinna cheese pictured here isn’t the one used on the night – they selected Kilree which is a new softer Knockdrinna cheese.  I will post a picture when I get my hands on some!

Incidentally my actual cheese board is Irish too and was a present from my sister many years ago.  It has been nicely seasoned thanks to the dishwasher (loaded in by the mysterious dishwasher loading fairy) and has lost its knife holder.  I can still make out the maker’s stamp though and it’s by Con Doyle – now trading as Cormac Doyle Woodcraft and stocked by mabelandviolet.com who are having a closing down sale so a few bargains to be had over there at the moment.
Til next time,
Sheila

Chicken Casserole. Take 15 minutes on your lunch break to prep this masterpiece for dinner with nothing else left to do but serve. 15 minutes - I timed it. A blob of yoghurt optional. See today’s story, will add to highlights when I get a chance.
Follow @gimmetherecipe